My Seinfeld apartment floor plan has cool details from the show, too:

My Guys' Apartment collection is better than a double-dipped chip!  Jerry's Seinfeld apartment (with Kramer's apartment, too), the Joey and Chandler apartment from Friends, Barney Stinson's apartment from How I Met Your Mother.

Don't kill Independent George -- BE Independent George in my Bad Guys (Comedy) collection of the most adorable horrible people on TV: Barney Stinson's apartment from How I Met Your Mother, and the Two and a Half Men house floor plan of Charlie Harper.

There might be no soup for you, but there are three TV show floor plans in my Girls' Apartment collection: Monica's apartment in Friends and the How I Met Your Mother floor plan from Lilly, Marshall, and Ted's apartment.

Reproduced from my original and expertly hand-drafted drawings of my Seinfeld apartments of Jerry Seinfeld, Cosmo Kramer, Elaine Benes, and George Costanza, these Seinfeld posters are printed on archival, matte paper with fade-resistant inks.

For more information about my posters and their packaging, please visit my TV floor plan prints page. ©Copyright Brandi Roberts. Copyright not transferable with sale. 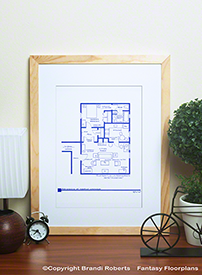 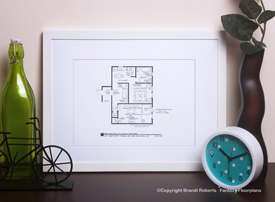 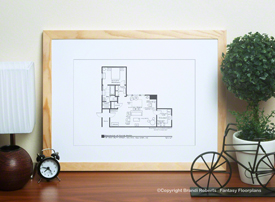